Amazon and Rhenus would test the eActros LongHaul starting “as early as 2023”.

The two companies have each signed a letter of intent with Mercedes-Benz Trucks.

Logistics service provider Rhenus would use the e-truck in multiple different business areas to gain as much experience with the BEV as possible. This would include transport of sea containers and towing tarpaulin trailers to evaluate functionality and suitability for daily use. 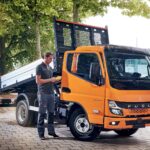 The first eActros prototypes are already undergoing intensive testing and the LongHaul variant will also be tested on public roads this year. Series production starts in 2024.

The eActros LongHaul should have a range of around 500km (300 miles) on a single battery charge and be capable of so-called “megawatt charging”. A “concept prototype” of the eActros LongHaul will be shown at this month’s IAA Transportation in Hanover.

Michael Scheib, head of product management, Mercedes-Benz Trucks, said: “We will rely on early practical tests with customers. So our engineers will be able to incorporate valuable knowledge gained from real world operations, especially with regard to high-performance charging, directly into the development of the series-production vehicle.”

Andreas Marschner, VP, Amazon Transportation Services, said: “Due to today’s range constraints of batteries, recharging is a key challenge that we need to tackle. Building high power charging solutions is a promising approach and we [will] test it with our partners.”

Sascha Haehnke, managing director of Rhenus Transport, added: “Of course, so-called depot charging forms the basis for the use of battery electric commercial vehicles. But if we want to use significantly higher numbers of e-trucks nationwide in Germany in the future and, above all, over longer distances, we will have to use every charging alternative. This includes high performance charging on the road and, ideally, during the statutory rest periods. This is the only way to achieve optimal truck capacity utilisation.”

Amazon and Rhenus are planning to test the eActros LongHaul as part of a “High performance charging for long-haul trucking” (HoLa) test project, supervised by the VDA. The aim of HoLa is development, operation and scientific support of a high-performance charging infrastructure for battery-powered long-distance transport. In addition to Daimler Truck, other consortium partners from industry and research are involved in the project.

CCS charging stations will initially be installed at several locations along the A2 between Berlin and North Rhine-Westphalia. As the project progresses, selected sites will be equipped with charging stations equipped for the megawatt charging system (MCS). Daimler Truck is extensively involved in the development of a new MCS charging standard as a member of CharIN, the global association for the standardisation of charging infrastructure.

HoLa charging points will installed at several locations along the A2 located on the motorway and in logistics centres to allow testing in real-world conditions and “authentic user experience can be gained”.

Testing will focus on rapid e-trucks: BEVs should be able to be charged at high power within the statutory break time of 45 minutes.

Mercedes-Benz Trucks engineers specialising in such testing will accompany customers throughout the project duration while E-truck drivers will receive extensive instruction on how to use the vehicle and charging system.

Feedback from drivers will be collected in the form of regular interviews and questionnaires consolidated and evaluated for further development of the prototypes and charging technology. Measuring instruments are also installed in the e-trucks, which collect data while driving and transmit it to the automaker for evaluation.

Selected data will be made available to research institutions involved.

Batteries used in the eActros LongHaul have lithium-iron phosphate cell technology (LFP) characterised by long service life and more usable energy. The batteries can be charged from 20% to 80% percent in “well under” 30 minutes at a charging station with an output of about one megawatt.

The range on a single charge in combination with megawatt charging results in overall BEV ranges on par with conventional trucks and enables two shift operation.

“The core of the concept for battery electric, long distance transport is to offer customers a holistic solution consisting of vehicle technology, consulting, charging infrastructure and services. The eActros LongHaul should be the right choice for customers in terms of profitability, sustainability and reliability,” Mercedes-Benz Trucks said in a statement.