Automotive interior fabrics are becoming lighter and cheaper while providing additional functionality, processing and production efficiencies and improved recyclability. Yet keeping pace with current fashions will also be an important selling point in the future. Flatwoven products have been a major growth area, especially at the top end of the market as they have excellent properties including texture quality, colour and pattern variety and surface interest.


Due to processing and material developments, nonwoven materials that have been used in interiors for some time are now being seen in higher profile applications as they can have high sound absorption qualities linked with minimal weight, numerous optical design possibilities and excellent processing characteristics.

Recyclability of interior parts is receiving greater attention by North American and European vehicle makers. Visteon has received a top Environmental Excellence award from the Society of Automotive Engineers in the US for its new fully-recyclable olefinic instrument panels. Visteon says it is aiming to produce a fully-recyclable cockpit that will never have to end up in a landfill. Not only is the process environmentally friendly, but Visteon says it cuts operating costs as well. The panels are produced by Visteon’s Laminate Insert Moulding process which manufactures soft-panelled products with a ten-year durability rating as well as 100% recyclability. During the laminate moulding process, a pre-formed laminate skin is inserted into a horizontal moulding press before the injection cycle. The resulting product is a one-piece moulded polypropylene instrument panel skin with selective soft touch zones.

This process enables the company to build cockpits while integrating smaller components to help reduce weight and improve upon noise and vibration. Visteon currently uses this moulding process at its facility in Saline, Michigan to manufacture instrument panels on the Mazda Tribute SUV.

Last year [2003], new legislation swung into force requiring that 80% of all new vehicles built in Europe include 80% recycled content. As a result, interior designers are shying away from less environmentally-friendly materials, such as fibreglass, foams and mineral fibres. Natural fibre products, such as flax, hemp and sisal and jute, are beginning to replace fibreglass in headliners, door panel trim and package trays. In addition to their recycling benefits, such natural fibres are typically lighter and cheaper than their glass and syntheticbased counterparts.

Stuffing and running cars with natural materials is becoming a talking point. Ford recently unveiled its Model U at the 2003 Detroit motor show, conceived as the successor to founder Henry Ford’s Model T, in the company’s 100th year of existence. The engine is a hydrogen-burning version of the standard DOHC 2.3-litre petrol engine with specially-designed injectors running from two rails. Recyclable and natural materials are used throughout and include soyabased foam for the seats, soya resin for the tailgate assembly, continuously recyclable polyester seat covers, sunflower oil for lubricating the engine and soya-based grease in the chassis linkages.

Johnson Controls is also working on new designs and textures for interior trim panels in cars that incorporate natural materials as part of the decoration. Sample parts shown recently were covered in bark pieces, animal horn chips, rice paper and cork. Mercedes-Benz has already taken a lead in the use of natural materials for composites inside the car. Fibres from flax, sisal, hemp and kenaf are being used successfully and are not only lighter and cheaper than glass-fibre, but fully renewable as well. The use of natural materials as a decorative surface is new, however, and Johnson Controls believes it could well offer an attractive alternative for future car interiors, especially as materials like aluminium, leather and wood have become far more common on lower-market vehicles and high-end customers could well be ready for a new look. Johnson Controls says small interior trim pieces could be got to market quite soon, but larger items would have to wait for a major new model programme. The company says that the finish would need to be used carefully however, as the visual effect can be powerful.

Increasingly textiles are also becoming a point of differentiation for vehicle makers, and a means of improving comfort. Textiles are used in seats, door panels, carpeting, headliners and rear shelves.

Door panel innovations
In experimenting with new colours and material combinations, Johnson Controls’ designers have come up with a ‘Special Effect Door’. The concept demonstrates what door panels might look like in tomorrow’s small cars. But first they needed to characterise those car buyers, so defined three basic trend types: Young Trendsetter, Active Life, and Glamour. They then matched the three different trend styles to specific materials and colours. Johnson Controls see the ‘Young Trendsetter’ as one who ‘thrives on change’ and ‘enjoys fun and games.’ Lively colours and unique details appeal to this type and is reflected in the door prototype. The door panel carrier is translucent light blue while the door handle and map pocket glow in blue and white tones, and the middle section is covered in green fabric.

Johnson Controls and toymaker Lego have developed a new interior design called Lego InMotion. The new concept contains more than 50 new features and incorporates bold colours. The front-passenger zone was designed with adults in mind, while the second and third-row areas are geared towards children of all ages. For adults, the reconfigurable first-row overhead console features a variety of electronic products from an audio system to a rear-vision safety system. The first and second-row seats are equipped with four-point restraints, the second row seating features a child-booster seat and a flexible side-seat storage area that is removable and replaceable.

Intier Automotive has developed a flexible interior for Saturn‘s VUE SUV, which enables the right rear and front passenger seats to be folded flat. The seats were designed to accommodate larger cargo such as skis and ladders. The front passenger seat has a durable, scuff-resistant surface, while the rear seat has two-position reclining to 29. Each section of the rear seat, split into 70/30 can be reclined or folded flat independently by single-handed operation.

There is 1785-litre cargo space available with the rear seats folded, and the rear centre-passenger position is fitted with a seat-integrated three-point belt. The outboard rear seats have adjustable head restraints, while the optional leather seats have manual lumbar control and temperature control.

Foam innovations
The US consultancy Robert Eller Associates claims in a new study that polyolefin (PO) is about to take significant market share away from polyurethane (PU) as the preferred foam for automotive noise, vibration and harshness (NVH) applications. PU foams have long dominated this market, which accounts for some 940,000 tons of foam in the US and Europe, but cost, recyclability and product gassing issues are causing the move towards PO products. New PO techniques and products such as chemically cross-linked PO sheet, laminating PO sheet to textiles and the launch of Dow‘s new Strandfoam EA are also contributing to its growth.

The first battle ground between the two products is in door panel trim, and already two European OEMs have switched to PO for door panels Intertec, a joint venture between Johnson Controls and Japan’s Inoac Corp, has manufactured a novel instrument panel retainer for the Mazda6, using a thermoplastic resin that incorporates the foam and skin and delivers lower costs and better performance than the previously used engineering thermoplastic. Intertec used Hostacom resin from Basell for the component, which not only includes the foam and skin but meets paint and mould-in-colour requirements of the components plus recyclability scratch and mar resistance targets.

A unique grade of Hostacom was used to enhance the surface required for the flame-treatment process (to promote foam and paint adhesion) and this specific resin also allowed certain areas of the instrument panel to be made soft. Other benefits of the resin included more economical processing, reduced mass, uniformity in gloss and good colour stability. The whole process was the first time Intertech had used its new High Performance Integration technology on a North American vehicle. The company says Hpi offers improved styling harmony, fit and finish and simpler, cheaper solutions compared with traditional foam-in-place instrument panel technology. Intertec Systems is also supplying centre floor consoles for the Mazda6. It is the third largest independent producer of instrument panels in North America.

Innovation remains a necessity in a disruptive ecosystem, as continuous innovation allows companies to adapt, evolve, and grow through disruption. Using our in-house alternative datasets, we are excited to launch GlobalData’s Innovation Scorecard. This scorecard will allow clients to rank 3,500+ companies on their innovation activity, impact, and disruptive potential across geography, sector, and theme. The scorecard provides a data-driven framework to rank leading companies on the potential of their intellectual property (IP) portfolio. GlobalData’s Innovation Scorecard focuses not only on the activity of innovation in the organization but also on its impact and disruptive potential using the 3I framework: Intensity, Impact, and Ingenuity. The tool helps clients to identify the most innovative companies that are disruptive leaders and challengers and can create alpha for their portfolio using the insights driven by 19+ high-value KPIs. Download our report to find out more about this innovative tool. Key findings derived from this tool include:
By GlobalData 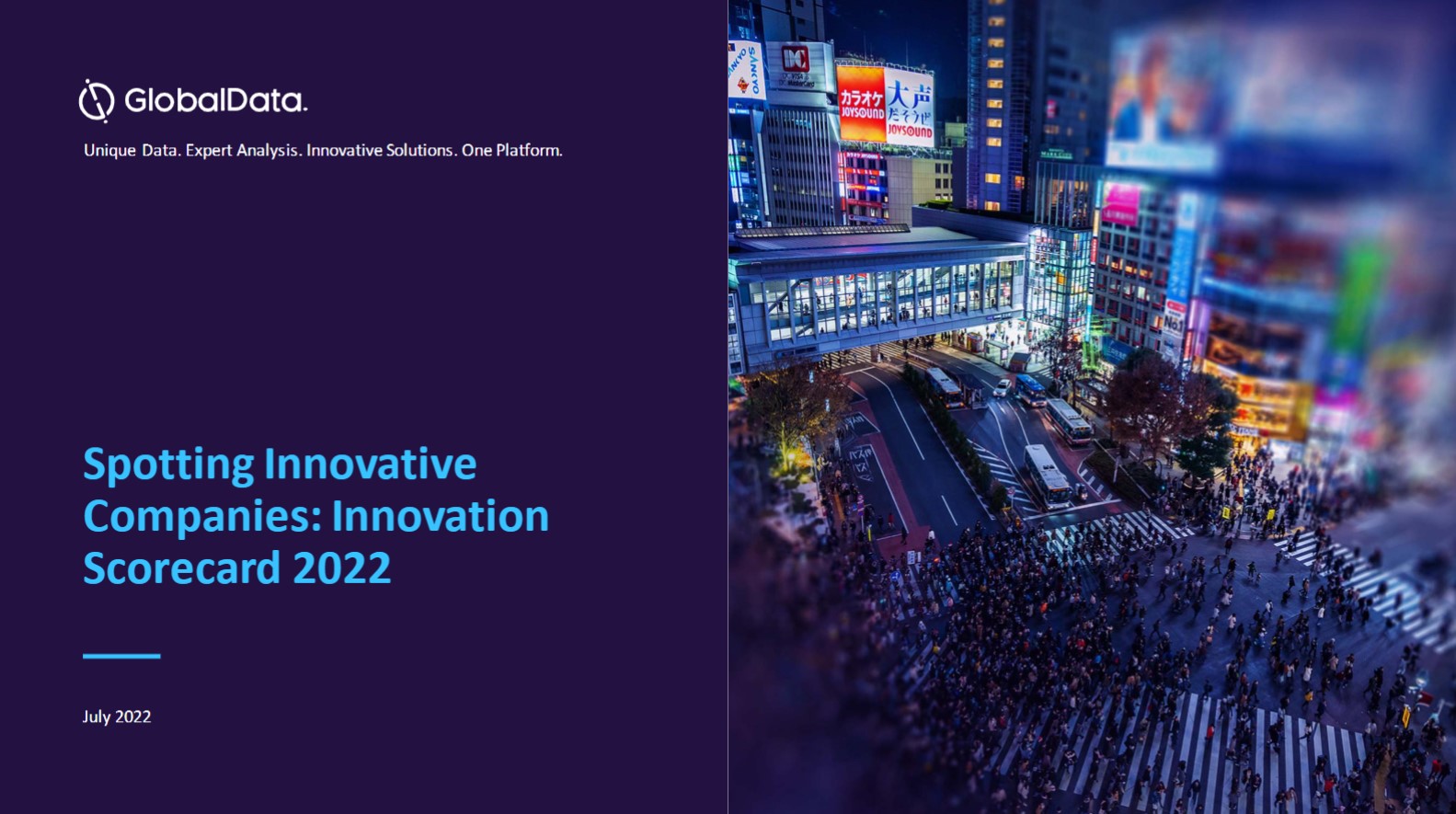 Thank you. Please check your email to download the Report.

Innovation remains a necessity in a disruptive ecosystem, as continuous innovation allows companies to adapt, evolve, and grow through disruption. Using our in-house alternative datasets, we are excited to launch GlobalData’s Innovation Scorecard. This scorecard will allow clients to rank 3,500+ companies on their innovation activity, impact, and disruptive potential across geography, sector, and theme. The scorecard provides a data-driven framework to rank leading companies on the potential of their intellectual property (IP) portfolio. GlobalData’s Innovation Scorecard focuses not only on the activity of innovation in the organization but also on its impact and disruptive potential using the 3I framework: Intensity, Impact, and Ingenuity. The tool helps clients to identify the most innovative companies that are disruptive leaders and challengers and can create alpha for their portfolio using the insights driven by 19+ high-value KPIs. Download our report to find out more about this innovative tool. Key findings derived from this tool include:
By GlobalData