Ford recently revealed the new Maverick compact pickup truck (codename: P758) destined for North America. While the new model is unlikely to challenge the mighty F-series pickups for sales success, it could still prove to be one of the Blue Oval’s most significant new additions to its lineup.

The Maverick may look and feel like a traditional pickup truck, but Ford has deliberately designed it to appeal to a broader range of buyers. Unlike the body-on-frame F-series and mid-size Ranger pickups, the Maverick uses unibody construction borrowed from Ford’s C2 platform – a C-segment chassis that already underpins the Escape crossover and Bronco Sport SUV. This makes it lighter than traditional pickups and improves on-road driving dynamics, with the only trade off being slightly less robust off-road and towing performance – although Ford already serves those markets with its larger pickup models.

The Maverick’s car-like construction and relative lightness imbue it with impressive efficiency – a feature rarely offered to pickup buyers. The base engine is a four-cylinder full-hybrid setup – making the Maverick the only pickup sold with a hybrid engine as standard. Power is expected to be between 180 and 200hp but Ford has claimed the system will return more than 40mpg(US) in the city. That means the Maverick will burn less fuel than both the Toyota Corolla and Honda Civic hatchbacks.

All that capability would be somewhat pointless if buyers couldn’t afford the new model but Ford has announced a highly competitive entry-level price for the Maverick of $19,995. That makes it the cheapest hybrid on sale in the US and prices it well below similar city-friendly vehicles. 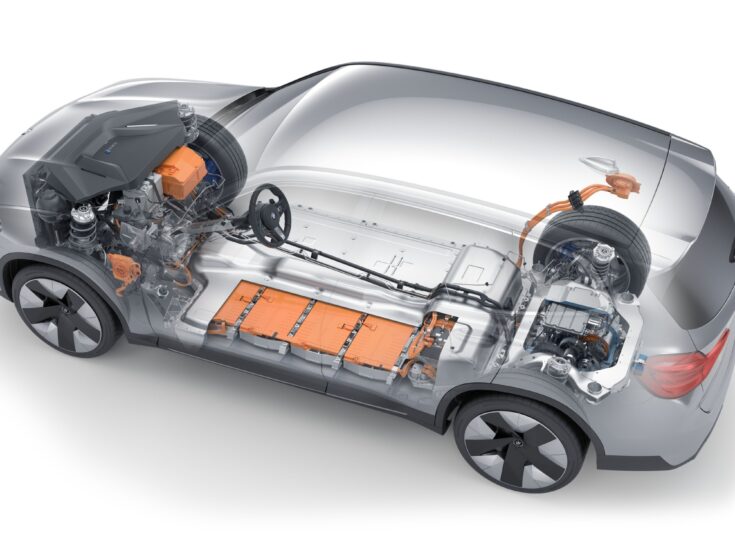 The Maverick walks a fine line between feeling reassuringly tough and utilitarian like a pickup, while also softening the experience for more urban-focused use cases. Inside, there is an upright dashboard and a tall seating position, along with useful features such as a household-style power outlet, lots of in-cabin storage and a configurable slot in the rear console for accessories. However, the attractive cabin material choices, bright colour schemes, the prominent incorporation of an eight-inch screen, and the decision to offer the truck in five-seat crew cab form only all point to a truck aimed less at commercial buyers and more towards urban family buyers.

The Maverick will be manufactured at Ford’s Hermosillo, Mexico plant alongside the Bronco Sport. Capacity at the plant is around 270,000 units per year and we expect it to be split evenly between the two. That is until the next generation Transit Connect (codename: V758) – also based on Ford’s global C2 platform – joins the Hermosillo line in the second half of 2023.

Small pickup trucks aren’t new, so why is Ford releasing the Maverick now?

It may seem odd that Ford has waited so long to offer a small pickup below the Ranger but it has not always enjoyed success in the segment. Little more than a decade earlier, the brand announced it would discontinue the mid-sized Ranger in North America in response to flagging sales, leaving the full-size F-series as its only pickups on sale. However, that strategy has since been reversed, with the Ranger reintroduced in 2019 and the Maverick following in 2022.

Guiding this move will be Ford’s 2018 decision to phase out traditional cars in North America over the next few years, with only SUVs, pickups and the Mustang sports car remaining in the lineup. This means Ford dealers would have few options in the showroom for buyers priced between $20,000 and $30,000 with the discontinuation of the Fiesta and Focus. The new Maverick will fill that gap thanks to its low entry-level price.

In addition, rival automaker Hyundai is about to release the Santa Cruz pickup for the North American market. This model is also a compact pickup using a unibody platform borrowed from one of Hyundai’s SUVs. It is not known exactly how the Santa Cruz’s specs will compare to the Maverick but they are likely to compete for similar buyers – the Hyundai may be a little more expensive than the Maverick but could counter with more standard equipment and better performance.

The Maverick is a wise move by Ford in our view. It offers much of the utility of a pickup truck in a package that will still appeal to urban buyers who may be put off by the size, price and running costs of a full-size model. The temptingly low entry-level price is particularly impressive although it remains to be seen whether Ford can earn enough profit on each unit to make it commercially viable.

Topics in this article: Ford, pickup