Tesla is considered by many – including industry analysts and investors – to be the automaker of the future, with its emphasis on smarter and cleaner mobility. The company’s innovation-driven approach and its high expenditure on capital ensures that it stays ahead of its peers. A continuing focus on new product development and product scaling, along with its plan to enter emerging markets, such as India, will help the company sustain its status as a leader in the coming years, says GlobalData, a leading data and analytics company.

The company was able to reach its target of delivering half a million vehicles in 2020 and it increased the production capacity for the Model 3 and Model Y to 500,000 at the Fremont factory in California. Over the last year, share prices of Tesla rocketed 951% from US$95.6 in January 8, 2020 to US$880 in January 8, 2021 with the strengthening of renewable energy stocks. As congress confirms Joe Biden’s victory, Tesla’s stock soared 24% year-to-date (YTD) as of January 8, 2020 as Democrats bat for green energy legislations.

Ramnivas Mundada, Lead Analyst at GlobalData, says: “Norway, the first country globally where the purchase of battery-electric cars outperformed cars run by gasoline and diesel in 2020, is just the tip of the iceberg. We can expect similar patterns to emerge from other countries over the medium term as they race to meet green energy goals. Rising demand for electric cars, penetrating new markets like India, launching cheaper variant of cars such as Model Y Sport Utility Vehicle (SUV) in January 2021 and plans to introduce affordable family cars, will help to sustain Tesla’s sales momentum over the medium and long term.”

To capitalize on soaring share prices, Tesla raised US$10bn in capital through stock offering, US$5bn each in September and December 2020, respectively, amid surging demand for electric vehicles and solar panels. The raised capital will be used for the upcoming factories in Germany and Texas and for the planned expansion of Model Y capacity in Shanghai. The company is expected to invest US$4.5bn to $6bn each over the next two years in capital expenditure to support future growth.

David Leggett, Automotive Editor at GlobalData, comments: “Tesla is a star performer in autos at the moment. It is turning a profit, ramping up production and tapping into rising demand for electric vehicles globally. Crucially, it has products that people want to buy. Last year it hit 500,000 deliveries, approximately 36% up on 2019 – an impressive achievement. With a new manufacturing plant in Berlin set to come on stream this year, more volume growth is in prospect.”

An increase in production capacity, rising demand for electric cars and its fifth straight quarter of profit ending Q3 2020 along with plans to penetrate new markets has triggered hiring activity in Tesla. According to GlobalData’s Jobs Analytics database, active jobs increased by 324% to 5,258 on January 5, 2020 when compared with August 1, 2019. The company mainly embarked on a cost saving recruitment strategy by hiring part-time employees and providing fewer benefits.

At the same time, GlobalData’s Filing Analytics platform identified that the average sentiment score for all filings released in 2020 was 18% higher compared to 2019. Additionally, earning transcript mentions of ‘share price’ and related keywords rose by 14% in 2020 in comparison to 2019. With its blowout 2020 performance, sentiments are expected to skyrocket post the company’s upcoming earnings release.

Mundada adds: “Tesla’s growth story is only set to ramp up over the coming years as it aims to help accelerate global transition to a green economy. In December 2020, EU ministers agreed to cut tolls by 50% for electric or hydrogen run trucks until April 2023, while individual EU members can extend it to 100% until 2025, which is likely to increase further investments in electric vehicles.” 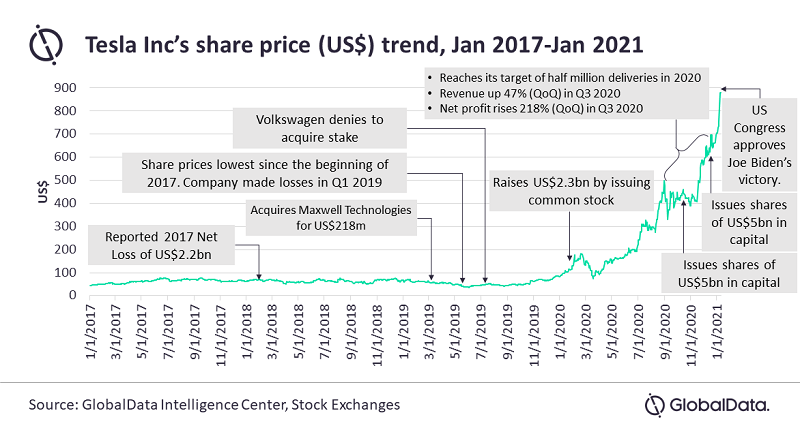