A recent report highlighted Mercedes cars and MPVs for the decade ahead. This second instalment explores SUVs.

BMW’s next-generation 7 Series luxury sedan will include – for the first time – a battery-electric version. How does it compare with all-electric luxury rival, the Mercedes-Benz EQS?

Nio said its application to list its share on the Singapore Exchange had been approved as the Chinese electric vehicle (EV) manufacturer eyes hedging the potential risk of being delisted in the US. Nio listed its shares on the New York Stock Exchange as part of its initial public offering (IPO) in 2018. It also listed shares on the Hong Kong Stock Exchange in March of this year, albeit without a public offering of its shares. But there is growing pressure on US-listed companies to disclose company data or risk being delisted, particularly Chinese firms due to their government secrecy policies. Last week the US Securities and Exchange Commission (SEC) put Nio on a list of 80 US-listed Chinese companies that face delisting under the Holding Foreign Companies Accountable Act (HFCAA) if they fail to turn over audit results for three straight years.

War in Ukraine and its economic impacts have caused the Russian vehicle market to collapse. Figures released by the AEB in Moscow show that the Russian light vehicle market (cars and LCVs) in March plunged by 78.5% to just 32,706 units sold. The sharp decline follows a drop of 62.9% in March (55,129 units sold). On an annualised basis, sales were running at under 700,000 units a year in April and March, which compares with an average of 1.8 million units a year in January and February. According to GlobalData’s database, Russia’s local automakers carry the greatest exposure to the collapsed domestic market, earning around 90% of their sales at home. Analysts forecast that the Russian GDP will decline by 10-15% in 2022, alongside higher price inflation and falling real incomes. Sharp price rises are also a feature of the car market with increases of 20-30% typical. The market outlook for Russia this year is bleak. 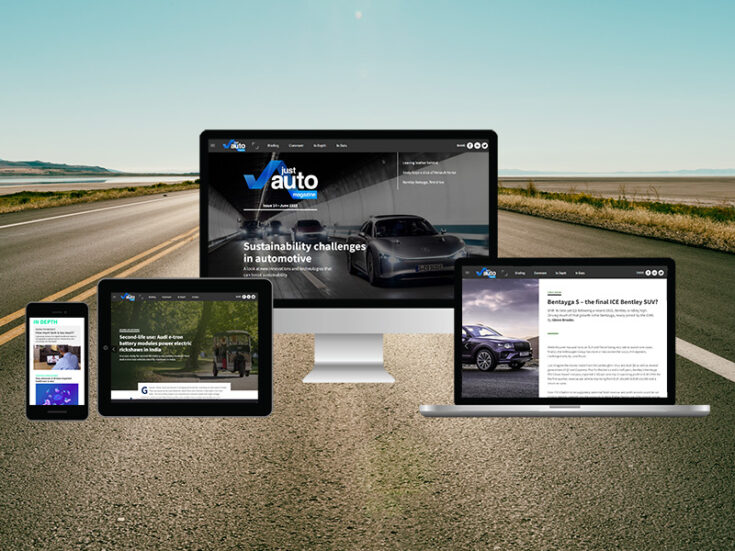 Toyota Motor Indian subsidiaries plan to spend a combined INR48n (US$624m) making components for electric and hybrid vehicles (EV) in the country as part of efforts to achieve carbon neutrality by 2050. Majority owned Indian vehicle making joint venture, Toyota Kirloskar Motor, and its local transmission components joint venture Toyota Kirloskar Auto Parts, announced jointly they had signed a memorandum of understanding (MoU) to spend IDR41bn on EV component manufacturing facilities in the southern Indian state of Karnataka. A further INR8bn would be spent by another local Toyota subsidiary, Toyota Industries Engine India. Toyota Kirloskar vice chairman Vikram Gulati said in a statement: “From a direct employment point of view, we are looking at around 3,500 new jobs. As the supply chain system builds, we expect much more later.” The Indian market for battery powered EVs is still in its infancy.

Reuters reported on Tuesday Tesla had stopped most production at its Shanghai plant due to problems obtaining parts. The news agency cited an internal memo it had seen. Its sales in China had already slumped by 98% month on month in April, Reuters said, citing data from the China Passenger Car Association (CPCA). Tesla had planned to manufacture fewer than 200 vehicles at its factory in the city on Tuesday, according to the memo, far below the 1,200 units per day it had ramped up to shortly after reopening on 19 April following a 22-day closure.

The Global Light Vehicle (LV) selling rate fell to 75 million units a year in March 2022, bringing the Q1 2022 average to 79 million units a year, as global supply-chain issues continued to constrain sales across the world. In year-on-year (YoY) terms, vehicle sales in March were down 14%. The US saw a continuation of tight inventories and high transaction prices. China’s market, however, was up by almost 5%. US Light Vehicle sales fell by 22.0% YoY in March, to 1.26 million units, with the annual comparison hindered by a high base effect. The selling rate declined to 13.4 million units/year, from 14.0 million units/year in February, driven by the fact that under normal conditions March sales would be expected to be higher. Inventory is still extremely tight, and average transaction prices, at US$44,262 in March, were still up by 18.8% YoY. On a positive note, fleet sales showed signs of recovery in March, accounting for 14.9% of the total market.

In recent news Honda was found to have a vulnerability that allows cybersecurity hackers to remote start vehicle engines and unlock them from a nearby distance. The process involves taking control of the remote keyless entry system and capturing the signals sent from the owner’s key fob. This particular issue affects nine Honda models including the Civic LX and Civic Hatchback. Experts have advised owners to protect key fobs with pouches and even reset them at a local dealership if they think they have been impacted. With this issue in mind we spoke to Bernard Montel, technical director for Tenable EMEA to discuss the issue of automotive cybersecurity and what more could be done to address this issue.

Geely’s stake in Renault’s Korean operation will raise speculation that it will use its partner’s factory as a base for exports to the US – thus avoiding tariffs that apply to China imports. Geely has confirmed that it will purchase slightly more than a third of Renault’s South Korean business operations, previously the home of the Renault Samsung Motors joint venture. This deal builds on an existing partnership between the two auto groups that will see Geely’s CMA-based models built at the factory in Busan. The reported purchase price for the transaction was around $200 million, netting Geely a slightly more than one-third ownership of the operation which, at full capacity, can build up to 300,000 vehicles per year. Considering the factory is already well established, with an existing network of labor and parts supply, the price represents a good deal for Geely, which would have faced far higher costs had it decided to set up its own South Korean facility from scratch.

A first quarter demand surge means vehicle markets in southeast Asia have returned to pre-pandemic levels. Vehicle sales in the ASEAN region’s six largest markets combined rose by almost 23% to 832,390 units in the first quarter of 2022 from 677,397 units a year earlier, according to data compiled by www.AsiaMotorBusiness.com from various industry sources including vehicle manufacturers, trade associations and government departments. Indonesia led the rebound with vehicle sales surging by over 41% to 263,822 units, as most markets in the region returned to pre-pandemic levels despite new restrictions imposed in the region during the quarter in response to the latest surge in Covid infections. Sales in Thailand rose by over 22% to 231,189 units in the first quarter, while in Malaysia the market was up by over 14% at 159,752 units, with stronger growth expected for the remainder of the year.

A heads-up – our daily newsletter was revived this week in a new format we think you’ll like. Check your Inbox each morning from around 11am UK time.