The original ES launched the Lexus brand way back in 1989, alongside the LS flagship saloon. Today, the ES is the carmaker’s most popular saloon, having amassed some 2.3 million cumulative global sales. The seventh generation is more spacious, quieter and safer than its predecessors.

In a model update for 2022, the frontal design was revised with a new treatment of the spindle grille with fewer vertical bars and the introduction of L-shaped elements. Slimmer units were added for both the single and three-eye LED headlights. New wheel designs have also been introduced this year while interior updates include a 12.3-inch touchscreen and trim inserts options. For the ES F Sport, there is a new White Tahara option with contrasting black bolsters and seatback and cushion centre sections.

The Takumi cockpit also features black Shimamoku synthetic wood trim inlay. According to Lexus Enthusiast, to create the Shimamokutrim, alternating layers of dark and light wood veneers are layered and shaped in a process involving 67 manufacturing steps over 38 days. 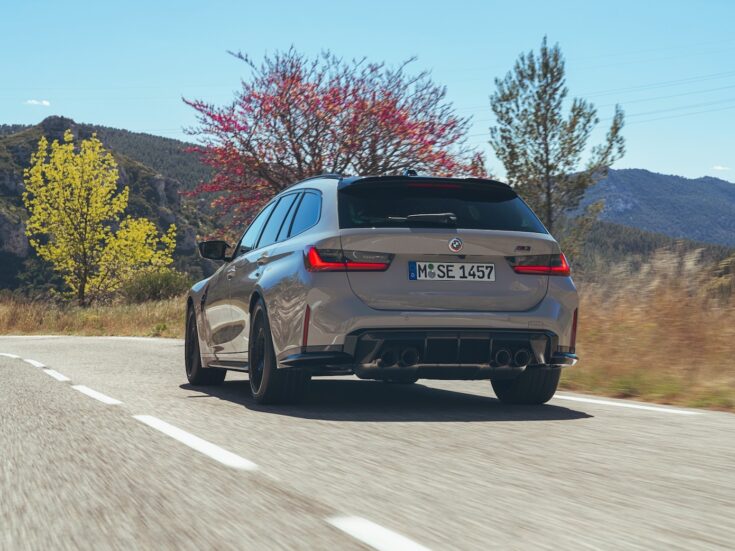 Given that the Lexus brand is known for fit and finish and material quality, the seat design has been a special focus of attention. The seat structure incorporates polyurethane foam wrapped around an iron frame. It’s the flat cushion and raised side sections that support the hips and keep the body stable, while subtle depressions in the cushion’s surface allow for smaller occupants to enjoy the same level of body holding as larger people.

Heated front seats are also standard for the driver and front passenger, along with new suction-type ventilation that draws directly from the air conditioning system for a quicker cooling effect.

Despite the advances to the seating set, unlike competing models, the rear seats cannot fold forward. That’s due to the structural reinforcement used to strengthen the car’s underbody.

A couple of rotary stubs protrude from the dash just above the steering wheel, enabling the driver to liven up the drivetrain, suspension and steering to suit their preferences.

Driving-related switches and controls are arrayed in a control zone that is concentrated immediately around the steering wheel. These include the paddle shifts, steering wheel combination switches, Drive Mode Select switch, starter button and shift lever, each located for the best ergonomic performance, focusing on easy reach and operation.

A touch-pad located on the centre console to partly control the 12.3-inch multimedia display screen looks neat but is a little fiddly and not as intuitive as the rotary one fitted on BMWs. It is easier to use the touchscreen to operate the sat-nav.

To achieve its goals for a quiet cabin, Lexus focused its efforts on three areas: countermeasures to tackle noise and vibration at their source; sound insulation, to prevent noise from intruding into the cabin; and sound absorption, making extensive use of special materials to soak up unwelcome noise.

The net result is an undeniably calm and welcoming cabin environment at a range of speeds. To eliminate potential noise sources, the ES underwent wind tunnel testing, resulting in tiny adjustments to the position of the door mirrors, wipers and other parts that intruded in the airflow over and around the car. The next step was insulation measures to prevent external sounds from entering the car, filling openings or sealing them with sheet metal. Noise absorption materials were added in key areas, such as the suspension towers, wings and underfloor to soak up sounds and vibrations.

The acoustic windscreen is supplied by AGC Automotive. A quieter interior is becoming more important to consumers as voice-activated devices such as hands-free mobile phones become more prevalent. The quieter the interior becomes, the easier it is to hear quieter squeaks or rattles that were previously blanketed by noise. In reality, there is a limit to increasing the mass or thickness of glass and also to controlling stiffness due to the limit of glass design. To increase damping effectively and obtain good sound attenuation, laminated glass is used with a viscoelastic plastic interlayer that changes vibration energy into heat energy. Since the first vehicle appeared in Europe with PVB acoustic windscreen – the Renault Clio II – the number of vehicles being fitted with acoustic glazing is gradually increasing.

The driver’s focus is kept on the road ahead by locating the centre display screen, instrument panel and head-up display (HUD) in a tight cluster within their field of view. Lexus calls this concept ‘Seat in Control,’ a notion that from the moment you get in, all the controls needed are within reach and all the information is in plain view.

The HUD projects relevant vehicle information onto the windscreen in the driver’s line of sight. In addition to basic functionality, such as speed, fuel level and shift position, the display can also present speed limit signs, lane tracing assist warnings and navigation directions.

There have been a number of technologies developed over the years that attempt to repel water from glass. These include hydrophobic coatings that aim to minimise water’s contact with a treated surface.  Acting like water repellents, hydrophobics cause rain and other accumulated moisture to bead.  Aided by airflow resulting from wind and the aerodynamics of a vehicle in motion, beads of water are readily shed from a hydrophobically treated surface. Cars with hydrophobic coating on the front door windows include the Land Rover Range Rover, Kia Cadenza, Hyundai Equus and now the ES.

Key to its safety performance is the latest version of Lexus Safety System+. This suite of ADAS technologies incorporates a camera and millimetre-wave radar used to monitor the road ahead for potential hazards and collision risks. This provides the ES with a Pre-Collision System which is designed to detect vehicles and pedestrians; dynamic radar cruise control; lane-keep assist with lane departure alert and a ‘sway warning function’; an automatic high beam system; and road sign assist.  The sway warning function monitors the car’s position in its lane and the driver’s steering inputs. If it detects degrees of vehicle swaying, it will sound an alert and display a warning on the instrument cluster, recommending the driver takes a break. The combination of adaptive cruise control and lane tracing assist corresponds to Level 2 automated driver support.

For 2022, the Lexus Safety System+ now includes include Intersection Turn Assist, which detects a high collision risk with traffic approaching from the opposite direction when making a turn, and pedestrians crossing the road in the car’s path of travel.

Emergency Steering Assist is another new addition that recognises when the driver is making a sudden manoeuvre to avoid an obstacle, such as a pedestrian in the car’s path. The system assists the steering movement while keeping the car stable and in its traffic lane.

Artificial Intelligence (AI) technologies have been applied to improve the Lane Trace Assist, giving smooth and continuous assistance to keep the car optimally positioned in its traffic lane.

The cruise control system can now determine the appropriate speed for an approaching bend, automatically decelerating the vehicle. It has also gained an all-speed tracking function, controlling acceleration and deceleration to maintain a constant distance to the vehicle immediately ahead.

The combination of Dynamic Radar Cruise Control and Lane Tracing Assist corresponds to Level 2 automated driver support (as defined by the Society of Automotive Engineers) – aimed at enhancing safety while the driver remains in control of the vehicle.

Another new safety advance offered in the ES is a two-stage Adaptive High Beam system (AHS). This not only turns the headlight high beams on and off automatically for the driver, its 24 LED light array can adapt the light pattern to provide an enhanced field of illumination while reducing glare for oncoming drivers.

For the 2022 ES, Lexus introduced its BladeScan Adaptive High-beam System, which focuses the light beam from the LED headlights using a fast-rotating mirror to give a much wider field of illumination when using dipped lights. The system is part of a new three-eye LED headlight arrangement that is standard on the Takumi grade and included in the Premium, Tech and Safety and Takumi Packs.

A 17-speaker Mark Levinson PurePlay system delivers incredibly good audio quality. The array of speakers – two more than in the previous generation ES – includes 14 90mm Unity speakers, installed at seven points around the cabin, in a line from the instrument panel, through the top of the door panels, effectively surrounding the driver and passengers.

Placing the speakers at shoulder level enhances the acoustics and creates a tonal synergy. These timbre-matched locations deliver a consistent tonal colour between all the mid-range speakers and tweeters, effectively creating two identical sound stages for the front and rear passengers. As a result, each person in the car is enveloped in sound, creating a listening experience that is consistent in every seating location.

The system also features two nine-inch elliptical woofers in the front doors and a 265mm subwoofer behind the rear seats. The visible speaker grilles are finished with an organic pattern inspired by the veins of a leaf.

The sound system uses Clari-Fi technology, developed by Harman, which supplements real-time frequencies that are lost in compressed audio files, such as MP3 and streaming audio files. This restores the sound quality and stereo mix as closely as possible to the original recording.

Given that exterior rearview mirrors add weight, cost and wind resistance to the car, it is not surprising that some automakers wish to eliminate them thereby creating a sleeker look.  Removing the interior rearview mirror also makes it possible to redefine the rear of the vehicle, which can be narrowed. ‘Mirrorless cars’ use video systems and dashboard screens to increase the driver’s field of view, typically eliminating the blind spot by stitching together a panoramic view of what is behind and to the side of the car.

Although mirrorless cars will take time to get used to, most solutions we have seen feature high-resolution screens located close to where a driver would glance to check the exterior rearview mirror. Some mirrorless technologies assist the driver further by automatically adjusting to reduce sunlight glare or intensifying levels of brightness while parking.

For its part, Lexus has introduced digital side-view monitors for the ES 300h hybrid saloon. The feature became available in the UK as an option on the ES Takumi model from Spring 2020. Initially introduced in Japan in 2018, the system replaces conventional door mirrors with cameras linked to in-car monitors. These provide an enhanced view of the area behind and immediately alongside the vehicle in all driving conditions, reducing or eliminating the driver’s blind spots and adapting automatically to give an extended view when the car is turning or reversing.

Throughout the saloon cabin, the quality and finish of the upholstery, expensive-feeling trim materials and detailing continue to reflect the attention to detail that Lexus’ engineers have given the ES. On a more practical level, forward vision is good, uncompromised by the seating position thanks to the low bonnet line, low-profile dashboard and narrow A-pillars. The digital door mirrors are a welcome optional extra. Materials with various properties have been used in different areas of the saloon’s construction, giving strength, rigidity and lightweight in appropriate measures.

The lightweight soundproofing materials encapsulating the engine and transmission team up with a series of inventive touches to lower volume levels, while also producing weight and fuel savings. While our drive insulated us from the outside world, cocooned in comfort, it also felt cossetted and poised at every turn, providing a fabulous experience. Rival models include the BMW 5 Series, Audi A6 and Mercedes-Benz E-Class.